Why does the dog wag its tail?

Most recent scientific considerations of the dog behavior researchers indicate that tail wagging may mean much more than “I’m happy to see you”.

In old cultures and beliefs the worlds of humans and animals were interrelated but along with the development of the civilization, they started to gradually become distant. Contemporarily, science allows us to broaden our knowledge of animals. We can get to know the results of the newest research, and wildlife documentaries enables us to observe animals in their natural environment. We get to know them better and so we can understand them better and interact with them. Neurobiologists confirm what animal lovers have known for a long time – animals feel emotions, they can communicate with quite complex signals or thoughts, and they even have self-awareness.

Most of dog owners don’t notice if their beloved dog wags its tail more to the left or to the right. As it turns out, it makes a difference to other dogs.

And what does research say on that matter?

Now the researchers discovered that dogs send signals to other dogs by wagging. An Italian team of researchers showed dogs the videos of other dogs that clearly wagged their tails in one direction.

The researchers conducted research on 43 healthy dogs of various races and originating from different parts of the world.

A recognized expert in the field of animal behaviors, Professor Frans de Waal, claims that we inherited good nature after our animal ancestors; in his works, he also proves the existence of primary morality forms in animals. The Roman proverb “A man is a wolf to another man” is unjust to both wolves and humans. Humans originate from a long line of species for which living in a group was a strategy ensuring survival. Social species could exist because of mutual help and cooperation, which are related to emotions, feelings, sensitivity and empathy, i.e. sharing of feelings.

What are these feelings all about?

Science proves that pain and fear most probably have accompanied animals for a very long time. The feeling of pleasure is similarly universal. Control areas of emotional behaviors are located in the same areas of brain in all mammals.

Dopamine, which is responsible for controlling the feeling of pleasure, is very common in the world of animals, even in those much more primitive than mammals, and a smaller brain does not mean lower intelligence.

Dogs are excellent at adjusting to human’s emotions. These animals have lived among us for 15,000 years. It means that dogs had a lot of time to learn your human reactions.

The theory of mind is related to the ability to look in the same direction as your companion does. For a dog, it is no problem. A certain experiment showed the effect of the situation where the owner looked at one of the two of balls in the room. When the dog was ordered to bring the ball, it always brought the one its owner looked at – this surprising experiment is the proof of an amazing intelligence of the dog.

So why does the dog wag its tail?

Tail wagging is commonly considered a signal that the dog is feeling happiness or pleasure and apparently it is very content.

Dogs communicate by using many various signals sent by their bodies. Tail wagging is one of the ways to convey information to another individual. Usually, it is related to strong emotions, such as happiness but also anger, annoyance, anxiety, uncertainty or frustration.

You already know that tail wagging is related to various emotions and you also know that dogs wag their tails in different ways, so how to correctly identify the emotions of a dog that is wagging its tail? You need to carefully observe the position of its tail, the direction in which the dog wags its tail and how fast it does that. If the tail is positioned high, it might mean that the dog is full of energy, confident and may even turn out to be aggressive. If it is scared, depressed or anxious, then it will position its tail low, it will curl up and lower the tail between its legs blocking the smell from the anal glands.

A walking dog who feels comfortable has a freely lowered tail, and a slight tension and raising of the tail may suggest interest, attention or alert. The speed of tail wagging is related to the intensity of emotions; calm and regular tail wagging may mean insecurity or interest. Each caretaker is familiar with fast tail wagging combined with pulling the tail up and down, especially when they get home having been long-awaited. When the dog suddenly stops to move its tail, it may mean that the dog is waiting for something and has sharpened its senses.

But don’t let yourself be fooled by superficial observations – when you want to understand what your beloved friend tries to tell you and what it feels, observing its tail is not enough. Pay attention to the entire body, the eyes and behavior, and try to carefully read the signals it sends you.

And another fun fact is that a dominating dog wags its tail differently. It wags its tail more slowly, the tail is positioned higher, the legs are straight, the head is straight as well and held high – such a posture brings about respect. On the other hand, passive dogs wag their tails quickly, sometimes nervously, their tail is lowered, and their posture is closer to the ground, which is characteristic of dogs that are lower in the hierarchy. The more passive the animal, the faster the movements of its tail.

The same goes for your relations with the dog – you are taller and bigger, so you are dominant at least in respect of posture, and tail wagging may not indicate joy, but fear of us as dominant individuals.

The theory that tail wagging does not mean positive attitude towards human is close to researchers. Research also indicates that tail wagging may be a sort of an internal conflict because the dog experiences two contradictory feelings at the same time. It is joyful and excited. The researchers handling this topic also think that the wagging reflex occurs at an early stage of life because the puppy often has to fight for the food and jostle with paws when it is sucking its mother’s milk. It wants to get to the food, so it pushes through its siblings and starts to wag its tail nervously, claiming the exclusive right to milk and mother.

Dogs learn human body language very quickly, they are smart and clever animals – they would see, remember and even imitate.

You just need to look at your dog when you talk to it. Then, you will notice how it tries to understand your monologue and bends its head. It is exactly a type of behavior acquired in the course of interacting with humans. When you play with your pet, you lean, squat, get on your knees and look it in the eyes. The dog makes the same gestures encouraging another dog to play, but in its own way, which means in a dog’s way.

We say that dogs can laugh and they really can, the mimics of the dog’s face is varied and rich. They signal their mental state with their eyes, ears and lips. When the dog is scared or angry, its pupils get smaller, whereas when it observes something interesting or pleasant and worth their attention its eyes get bigger.

Our faithful companions of our lives often behave in a familiar, almost obvious way but… we do not understand it. We know that the dog wags its tail when it is happy, contrary to a cat that acts the opposite way. At the same time, some dogs move in a specific way with their entire body, which looks hilarious and funny.

Let’s keep in mind that our dogs not only love us boundlessly but also have some fears and experience emotions and sometimes complex feelings.

I’m so happy to see you! 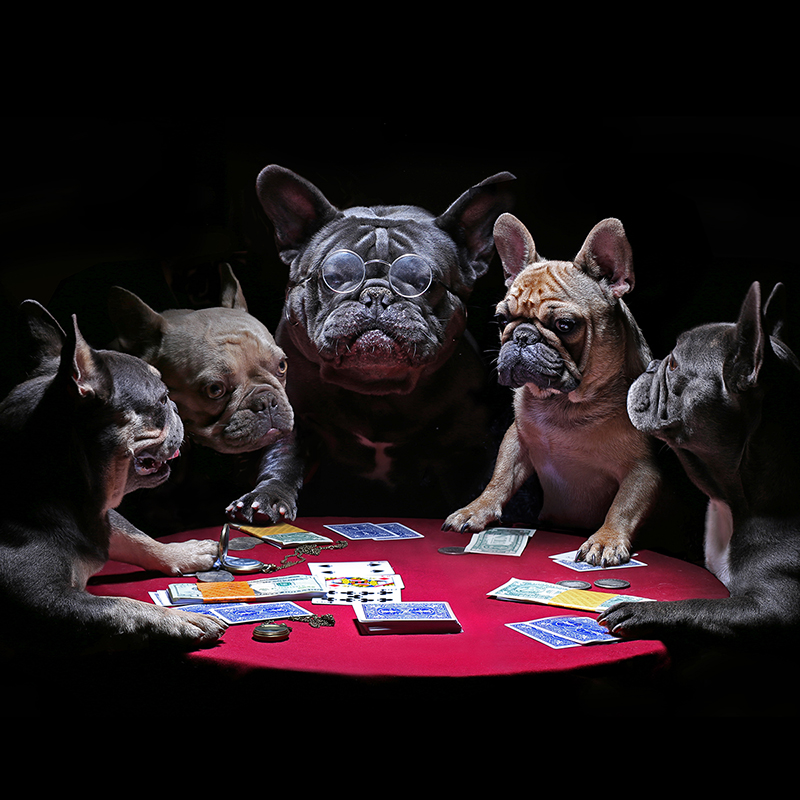 7 ideas for a play with a dog!

Everyone who owns a dog knows that there are 3 crucial things in their rascal lives: tasty food, rest and obviously crazy fun with people! Why is having fun so…
Read on 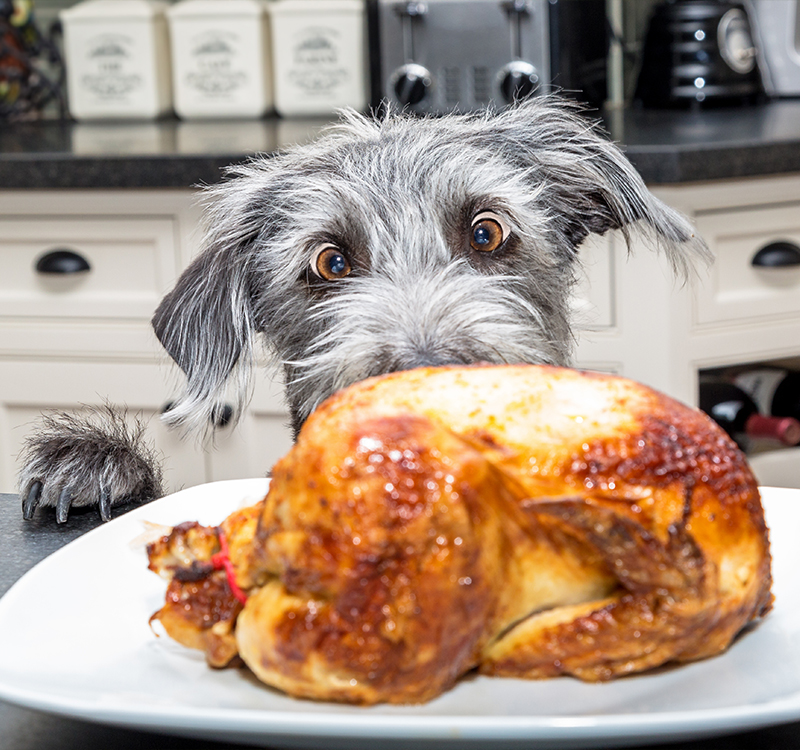 What to do when a dog bandit forces food from us?

A gourmand rascal, glutton, always hungry, unsatisfied or bored?   Demanding food is a behavior of the members of the dog gang that we don’t like. It’s worth knowing, however,…
Read on